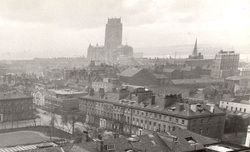 The Square 1960s - spot the difference
Abercromby Square was designed at the beginning of the Nineteenth Century, though most of the houses weren't built and completed until the 1820s.  Before this period the area was fields, marsh and a large pond, beyond the boundaries of the city cente ( or town centre as it was then, we didn't become a city until 1880).

Despite the fact this beautiful space was surrounded by a workhouse, almshouses, lunatic asylum, female penitentiary, brothels of Myrtle Street and other delights within spitting distance, for a time it became the most desirable place to live in Liverpool.  The great and the good, also known as the rich and often not so good, quickly occupied the houses, and those who lived here, unsurprisingly as they formed the nucleus of the 'powers behind the throne' of Liverpool Corporation, made significant contributions to the development of the city, and to industry, engineering and medicine.

Early inhabitants included several of the Liverpool dynasties, the Earle family, three branches of the Gladstones, the Littledales, and three of the prime movers in the creation of the Liverpool Manchester Railway, the company treasurer and solicitor, as well as members of the board.

The forties to sixties saw the movers of money and shipping, with the 'merchant princes' of the Ripley and Doering families, the finances of the Langtons and Mozleys, and future shipping line owners like the McIvers moving in.

For the sixties we have to acknowledge the massive role the Square played in supporting the Conferedate South, not just with the banker Charles Kuhn Prioleau, but the activist James Spence and several other 'behind the scenes' movers. Four extra houses were built in this decade, completing the construction of the houses, along with two extensions moving the front doors of 18a and 27 to face the gardens ( and officially change their addresses from Bedford Street South and Chatham Street to the more prestigious 'Abercromby square'.

The remaining decades of the Nineteenth century saw what some have described as a decline in the fortunes of the Square. While it is true it was no longer the breeding ground of politicians, merchant princes and railway pioneers, a new breed of wealth moved into the Square.  We now see people like the Borough Engineer James Newlands, Fawcett's managing director Alfred Chapman, Sir Edward Russell of the daily Post and Echo, and numerous surgeons and tradesmen of note, plus the creation of the Bishop's Palace, and occupancy by two successive Bishops, Ryle and Chavasse.

By the turn of the century, we also see the emergence of the new 'redbrick' Liverpool University, and an increasing number of distinguished academics living here, even before the properties became the property of the University and began their journey of conversion to education.  The period 1890-1930 saw probably the most significant changes to the fabric of the houses, internally at least, as they began to be joined together.
On May 15th I'll be giving a talk for the Liverpool History Society on Abercromby Square, held at the Grace Room, Cornerstone Building. Please do come along if you're interested.