While involved in renovations of some of the buildings of Liverpool’s Abercromby Square, I came across various interesting architectural peculiarities, folk history of the Square, and odd facts here and there.  I already knew, from the blue heritage plaques on the wall that two notable figures had lived in these houses, but various conversations and things I read hinted that there could be far more.

Before long, I was voraciously hoovering up references to the location in the evenings, starting with some nineteenth and eighteenth century contemporary histories of Liverpool I found online, and soon graduating to more specific books on individuals and subjects, and the idea for a book, or some other presentation format, took form. 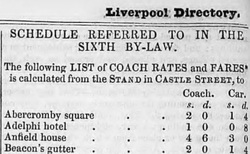 Robson's Directory 1840
The more I looked, the more I found. Social history facts of limited interest to non historians, but also names familiar in the history of Liverpool, and as it turns out, names well known in fields varying from poetry to physics, engineering to exploration, civic design to civil war.  Other names had made significant contributions in many fields, and not just in Liverpool, but these names were less well known.

The Square seemed at the centre of much that was great ( and also much that was noteworthy but not so worthy ) in Victorian Liverpool. The Square itself seemed to have a story. And a grand history. One that it seemed people might be interested in. 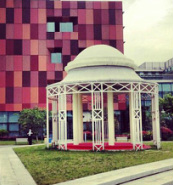 Abercromby in China
The story of the Square in the 20th and 21st centuries brings in a different sort of impact. In addition to those houses still occupied by residents, there was the impact of two world wars, the wholesale demolition and rebuilding of one side of the Square, and the major names in academia have taught in the buildings; names who have achieved impact nationally and internationally for their contributions to Architecture and Art to name but two.

Today, even Abercromby Square itself is spreading its fame, with the centrepiece of the gardens replicated in China at the XJTLU University campus.

Having read enough to know there was a lot of history here to be re-told, I decided to start by trying gather a comprehensive overview of the the occupants of the buildings and their history over the past two hundred years, and see which names, famous or forgotten, were worthy of bringing back to the public's attention. The blog on this site records some of that research, the history as it takes shape, and the difficulties and rewards of researching and writing a book.

The blog will trace my research into the occupancy of figures like Charles Kuhn Prioleau, Robertson Gladstone, James Newlands, Henry Booth and many others you may not be familiar with, but who have made significant contributions to Liverpool and the wider World, and who used to reside in the Square.